A native of Pittsburgh, PA, Moe! was intrigued by the art of cosmetology at an early age. He sat beside his mother at night while she roll-up her hair before bed. One evening Moe! asked his mother if he could roll her hair. He must’ve done an amazing job because this later became their routine and another opportunity for them to bond. 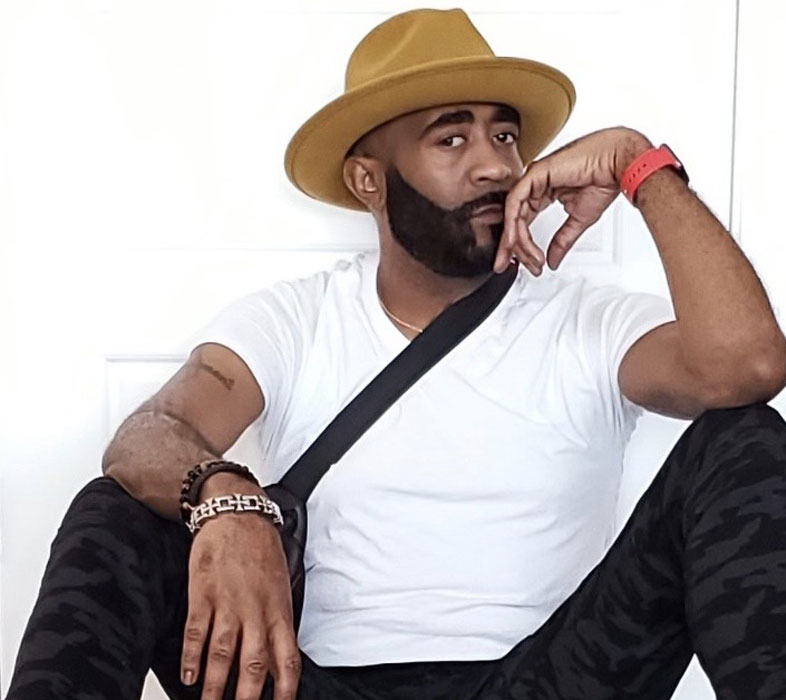 Moe!’s mother was a significant influence in his start into cosmetology. He accompanied his mother to her hair appointments at the nearby beauty salon. While his mother was being pressed, curled, or laid to the side, Moe! remained nearby, where he became a sponge to the profession. Luring in the background watching other stylist master their craft, styling their clients was very fascinating for Moe!

Taking what he learned in the salon, (only from observation) Moe! began to style his friends in his neighborhood. He eventually developed his own clientele, from S-Curl relaxers, to a side part dye job, Moe! was your guy.

Unable to contain his desire for the arts, Moe! began to broaden his interest. From the age of 10 to 16, he appeared in many local stage plays. He performed as the Tin Man in The Wiz, and as Danny in Grease. Moe! also performed at concerts around town. He opened for Queen Latifah during her college concert tour along with stars like The Jungle Brothers and A Tribe Called Quest.

After graduating from high school Moe! enrolled at the Washington DC Beauty Academy. While attending the academy, he was able to express his dual passion for theatrics, and hair. Moe! gained a reputation for creating show stopping images by adding theatrics during his competitions. These shows consisted of elaborate costumes, entertaining skits, and of course big fabulous Hair!

Ironically, this type of flair could not be confided to just a classroom. With this new found stardom Moe! was sought out to accompany the most influential stylist in DC. This opportunity afforded him the hands on experience he desired with instant gratification; which is why it took him 2 years to complete a 9 month Cosmetology course.

After graduating from The Washington DC Beauty Academy, Moe! returned to Pittsburgh,PA. With the earnings he won during competitions and freelance work Moe! was able to open his first salon at age 21, Attitudes By Moe!.

While working at his salon in Pittsburgh, Moe! was introduced to Atlanta producer, D’Angela Proctor-Steed of Strange Fruit Films. Impressed with Moe!’s work and his persistence to work in the entertainment industry, Ms. Proctor-Steed hired Moe! as hair stylist for singer Monica’s “For You I Will” music video.

This compelled Moe! to relocate from Pittsbugh, PA to Atlanta, GA. Continuing the relationship with Steed, Moe! booked his next music video for Atlanta’s new rap duo, OutKast, “Skew It On The Barbie”. Impressed with Moe!’s creativity and passion the group asked him to work on their next video “Bombs Over Bagdad” and to accompany them on their world tour.

Making a lasting impression on everyone he styled, Moe! established a reoccurring celebrity clientele. Captivated by his creative niche and unique styles, Moe! was hired by actress Chrystale Wilson (The Player’s Club) when she Produced her first film “Groupies” as key hair stylist.

Many artists were intrigued by Moe!’s knowledge and creativeness. In 2002 he joined artist development teams to provide input and style for emerging new artist during photo shoots and publicity tours.  Among them were Jive Records up and coming singer Nivea, Noontime Recording Artist ChaCha and BabyDoll and Stacy Betha of Harlem World.

Moe! was on the fast track to living his dream, but this was only the beginning. Having developed a solid salon clientele, in 2007 Moe! opened “Attitudes By Moe!” Salon in Atlanta. Where he began to focus on his brand and imagery, establishing a team of stylist trained by the master stylist himself.

Moe!’s uniquie technique and training method inspired many aspiring hair stylist. Compelling them to work under his direction. With such an immense following Moe! quickly out grew his salon and expanded to a larger one in Atlanta’s trendy Midtown location. His new salon holds 12 Stylist, 1 Barber, a Nail Tech, and massage therapist.

Moe! is passionate about sharing his knowledge and expertise with others. He holds a bi-annual bootcamp for his staff. This rigours bootcamp is designed to build team work efforts and teach trade techniques that strengthen the stylist, resulting in client satifation.

Moe! is the type of stylist who demonstrates his skill in many capacities. He has been a featured Platform Stylist for many major hair care brands, such as Outre, Bobbi Boss and Garnier.

When Atlanta emerged as “The Hollywood of The South” there was only one stylist who was equipped to fit the bill, Moe! In 2010 when the CW’s hit prime time series “The Game” returned to television on the BET Network. Moe! was hired as key hair stylist for seasons 4,5,and current season 6. BET was so impressed with Moe!’s distinctive style and readiness that they hired him for many of their projects. “Let’s Stay Together”, “Sunday’s Best”, “Reed Between The Lines” , “Second Generation Wayans” and “Being Mary Jane”

With this type of recognition it was only a matter of time before Moe! would pioneer with Atlanta’s entertainment mogul, Tyler Perry. In 2012 Moe! joined Tyler Perry Studio’s new prime time series, “For Better or Worse”. Making a lasting impression on Perry, Moe! was hired as Tyler Perry’s personal stylist for the hilarious commercial skit “Sophia Meets Madea”. The commercial was developed to announce the joint venture between Perry and Oprah Winfrey’s OWN network. The commercial was a huge success and gained a substantial following.

When the series began production Moe! was hired as Department Head for Tyler Perry’s “The Haves and The Have Nots” and “Love Thy Neighbor”

Moe!’s skills aren’t only confided to music video’s and television. He has also worked on several motion pictures, “Remember The Titans”, Scary Movie 5, “The Spectacular Now” and “Hunger Games Catching Fire”. In 2012 Moe! was the lead stylist on the national promotional tour for the hit film “Sparkle” the film gained an immense following that featured the late Whitney Houston.

Moe! has a vast brand development plan for his future. Applying his illustrious style and passion for the art of cosmotology, Moe! has strategized himself to open The Coles Acadamey and Education Center. The Acadamy will be a family business that can be around for years.

The Coles Acadamey and Education Center will serve as his catalyst, giving back to the community. The curriculm will consist of providing the fundamentals of cosmotology as a whole.

Altough Moe! has an extensive celebrity clientele. He doesn’t limit himself to the monikor, “Celebrity Stylist” but rather a “Healthy Hair Care Specialist” for Film ,Television and All of Your Visual Image needs. In restrospect, isn’t that what the Art of Cosmotolgy is all about,? Moe!